Other athletic accolades include the following: the 1-4A District Championship; Desiree Morales named 1-4A District MVP as well as the 2020-2021 San Elizario Female Athlete of the Year; Maryanne Tapia was named 1-4A All-District Setter for the third year in a row, and Anissa Chairez was named the 1-4A Outstanding Libero.

In a recent e-mail announcing the team's recognition, Alice Rogers, the Membership & Awards Specialist, for American Volleyball Coaches Association, stated, "This award honors teams who have matched their dedication to the sport of volleyball with excellence in the classroom. Meeting the award standards is an accomplishment." Rogers' recent press release indicates, "The award honors volleyball teams that maintain a year-long grade point average of 3.30 on a 4.0 scale or 4.10 on a 5.0 scale." 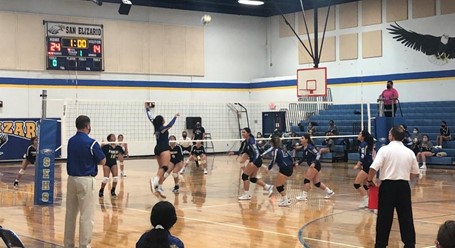 Coach David Desrosiers watches from the sidelines as the team works their magic.

When speaking with Coach Desrosiers about this award, he says, "This year's USMC/AVCA Team Academic Award is even more special as the team also achieved Honor Roll status meaning that the team's GPA was in the top 20% of all the teams to receive the award." Coach Desrosiers added, "The girls are special, achieving in the classroom and on the court and in multiple sports."