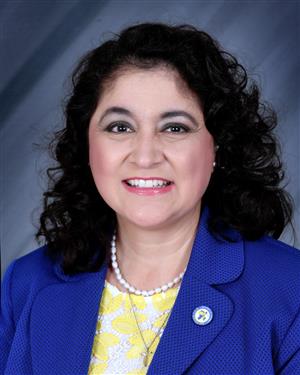 SAN ELIZARIO, TEXAS – The Texas Council of School Women Executives (TCWSE) held the state conference in Austin, Texas, with the theme of Dream It Believe It Achieve It Be It over the weekend. Dr. Jeannie Meza-Chavez, Superintendent of Schools for the San Elizario Independent School District (SEISD), was the conference opening keynote speaker among the other honors received. The statewide TCWSE Conference gets the support of the Texas Association of Superintendents and Administrators (TASA) as a precursor to the said organization's Mid-Winter Conference.

Dr. Meza-Chavez opened the TCWSE Conference with a keynote entitled the Power of Words, calling for the use of words to lift individuals and help them claim who they are. Other honors from the TCWSE Conference include Dr. Jeannie Meza-Chavez receiving the Bravo Award for Exemplary Practice and Innovation. According to the TCWSE website https://tcwse.org/awards-scholarships/bravo-awards/, the Bravo Award recognizes women for their work as "exemplary practitioners, in innovative programs and initiatives that promote community and parental involvement."

Other honors for Superintendent Dr. Jeannie Meza-Chavez were the 2022 Pat Shell Award for Professional Development. According to the TCWSE website https://tcwse.org/awards-scholarships/pat-shell-scholarship/, the scholarship is in "honor of Patricia M. Shell, who passed away in 2012 after a long and illustrious career in public education and was an outstanding Texas education leader and mentor to both men and women educators." Superintendent Dr. Jeannie Meza-Chavez plans to use the $1,000 scholarship for the Paso del Norte Health Foundation's REALIZE Executive Leadership Experience. Dr. Meza-Chavez recently received a letter from the Paso Del Norte Health Foundation CEO Tracy J. Yellen stating her nomination to apply for the REALIZE Executive Training.

As part of the TCWSE conference, the officers' election included the nomination and election of Dr. Jeannie Meza-Chavez as the Vice-President for the TCWSE. As the Vice-President, Dr. Meza-Chavez is responsible for overseeing "activities of the council related to membership recruitment and service, and shall also serve as liaison to all regional councils."

Superintendent Dr. Jeannie Meza-Chavez states, "The honors are about the work done in service to the beautiful children not only in San Elizario ISD but the collaborative work with others for children in the entire El Paso Region." She is particularly proud that nine out of the twelve districts in the El Paso region had representation at the women's conference. She states, "We can't get a seat at the table if we do not attend and continue developing ourselves so we can continue to lead." The following state TCWSE Conference will be January 28-29, 2023, with the theme Making history! Writing HERstory!